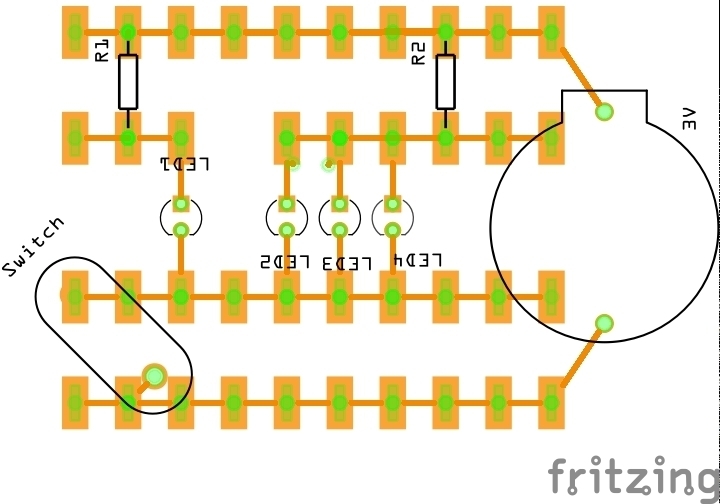 I've been working on the best method to diagram knitted circuits. So far I've been able to use the PCB view in Fritzing to create this image, based on the circuit diagram below. 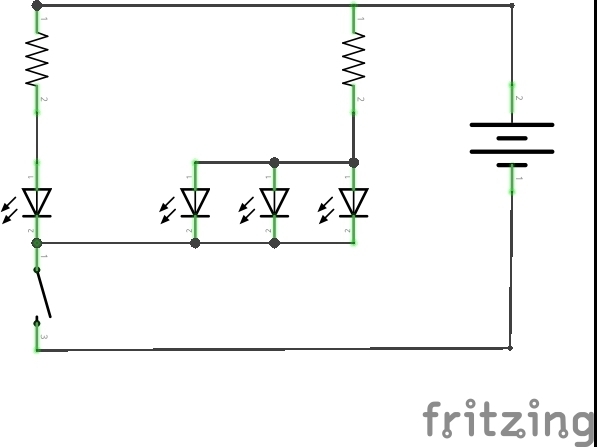 The circuit can be built on a knitted circuit board made with this pattern.

And if you've got a knitting machine, this file loaded on the machine will knit the pattern.

I'm working on an instructable that goes into the details of this design. Plus I'll be posting it on Hack A Day as part of my entry for the Hack A Day prize. 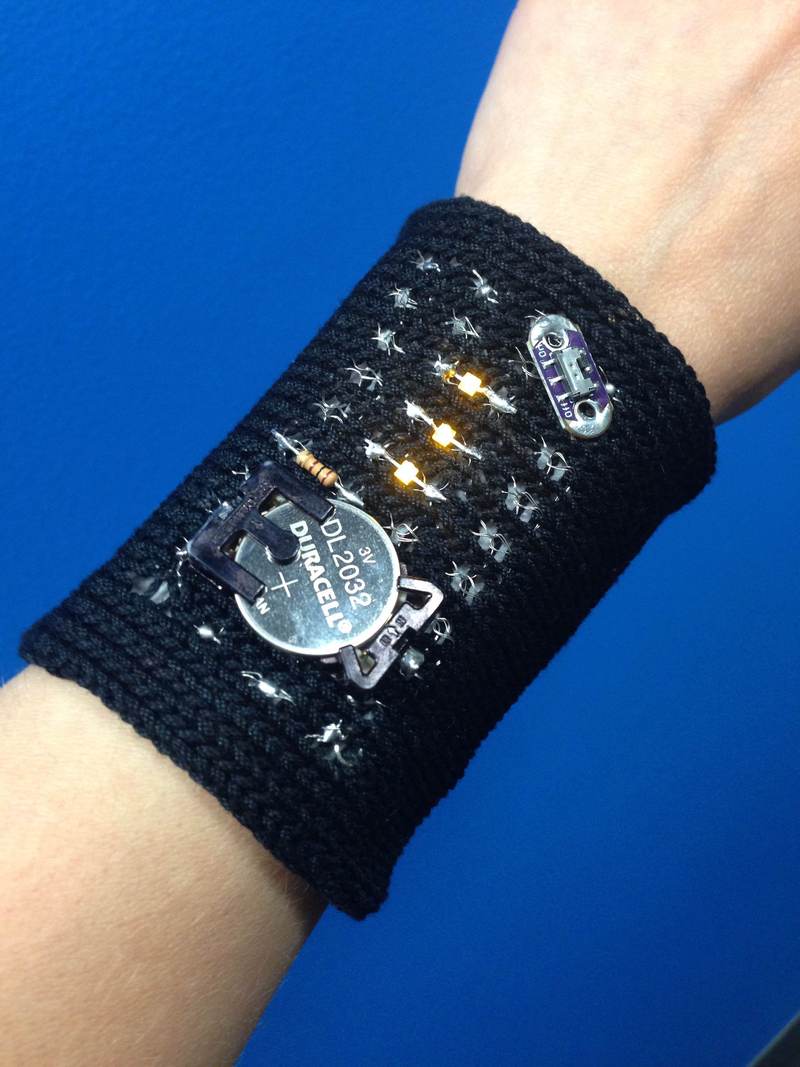 Angeleah Daidone recently sent me this photo of the bracelet she made in my Circuit Building Workshop.

When I posted my knitted circuit instructable last month, I also entered it into Instructables' Battery Powered contest.
And... it took the grand prize! How cool is that???

I was, needless to say, thrilled for the recognition (and winning a new camera, tablet, and power tools ain't bad either!). I've posted two more instructables this month:

How to make your own e-textile Arduino

And today, how to solder stainless steel thread.

Lauren Singer of Houston, Texas (Ravelry ID: AuntieAnty) contacted me recently through Ravelry, to share Linen, Electronics and Diodes, a circuit-knit project she made with Glenn Manuel (Ravelry ID: Glennman), based on my knitted circuit design.

I'm thrilled to see people picking up the project and experimenting with new approaches. Lauren used 28AWG bus wire and a 50/50 cotton/linen blend. As far as I know, this is the first hand-knit version of the design (since I machine-knit mine). Very cool! I hope more will follow! 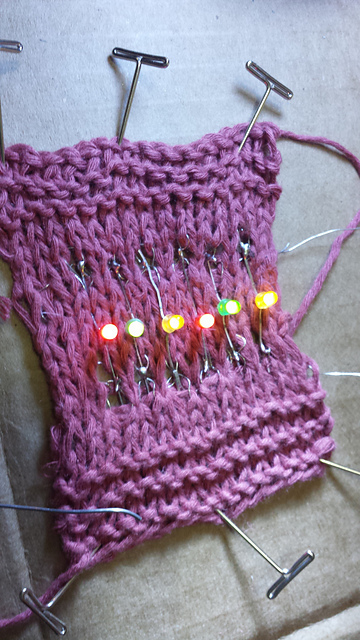 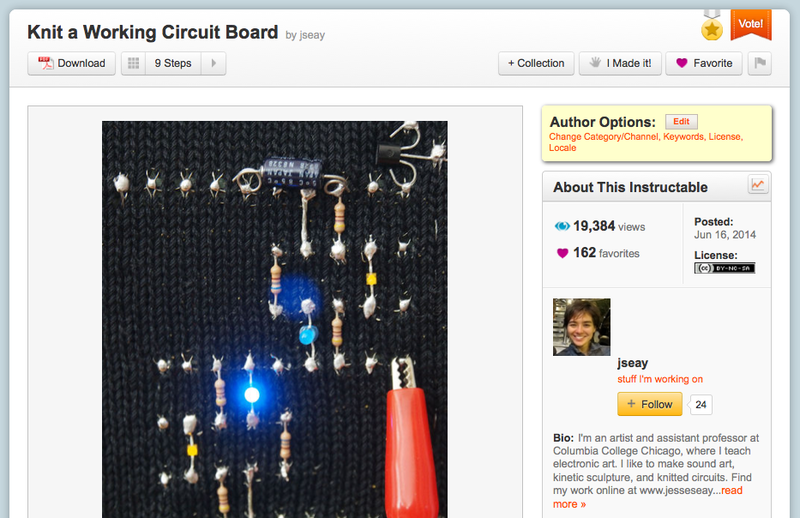 I posted my instructable for knitted circuits June 16, and had fun watching it spread across a tiny corner of the internet. 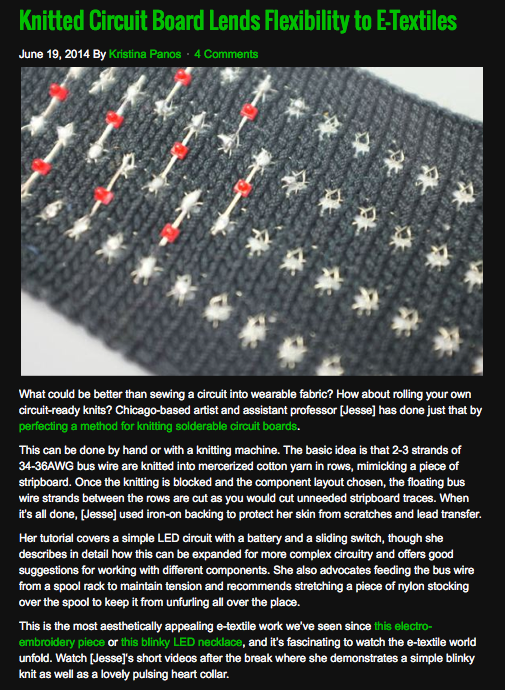 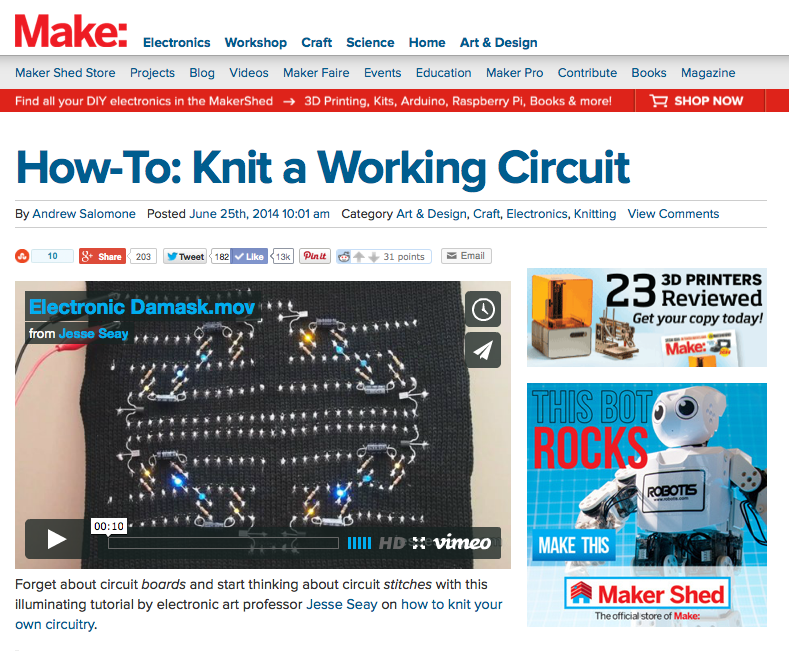 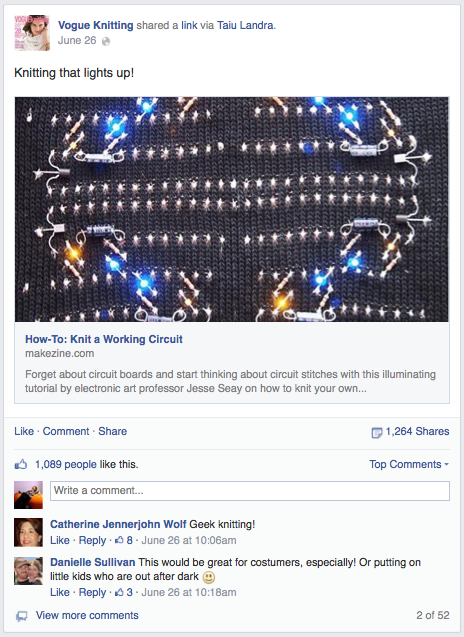 I taught my first round of Electronics Workshops for Women the past two Saturdays.

It was awesome and there were a lot of requests for more events like this, so I've created a Meet Up page -- sign up and come solder with us. 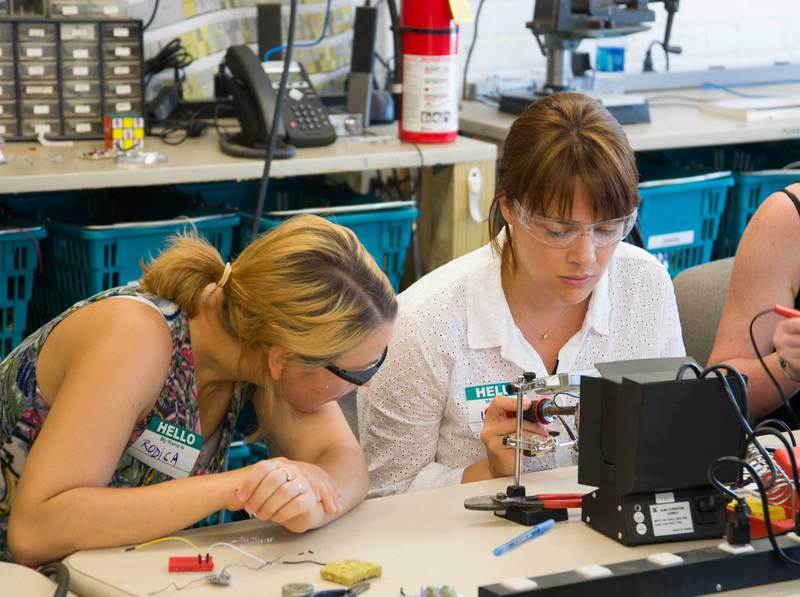 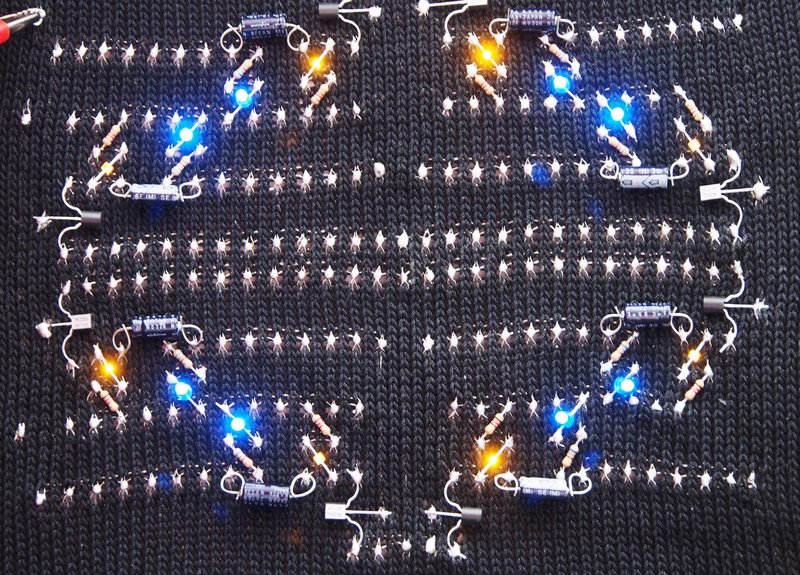 I got the idea for this pattern from the wee blinky, an astable multivibrator that flashes a pair of LEDs.

To create a knitted circuit pattern, I tried to minimize the number of places where traces cross over each other and require jumpers.

It was fun to plan, and after I got one working, I started multiplying it to create a pattern reminiscent of damask.

(I'm having a strong urge to reupholster the couch in this pattern, now.) 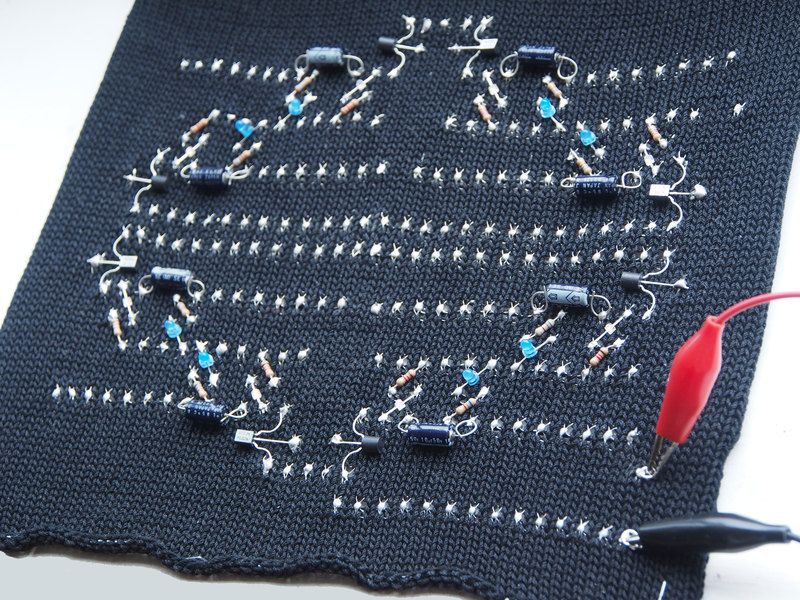 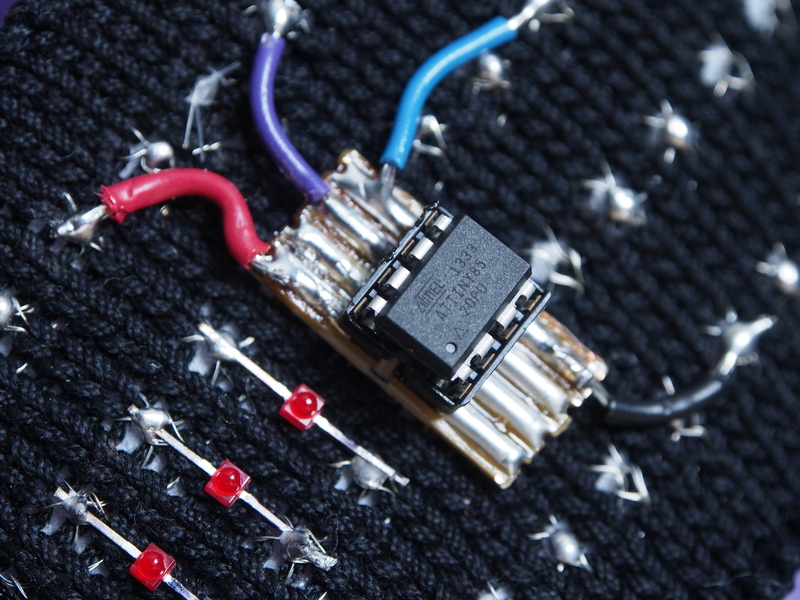 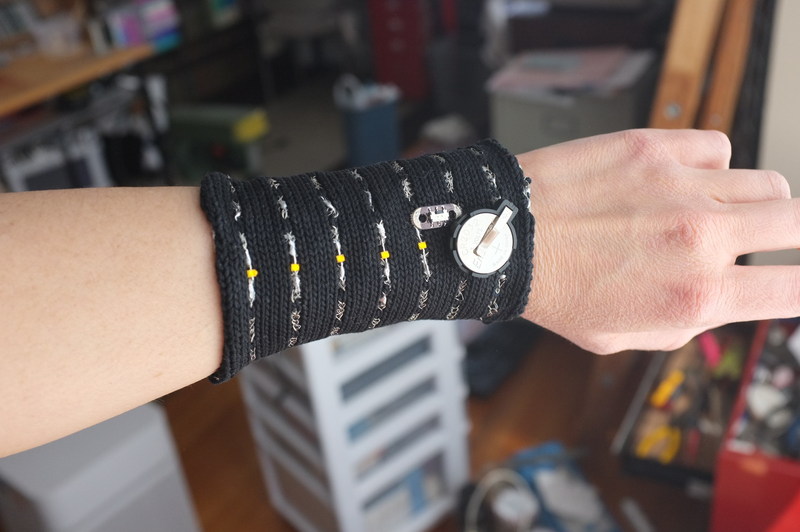 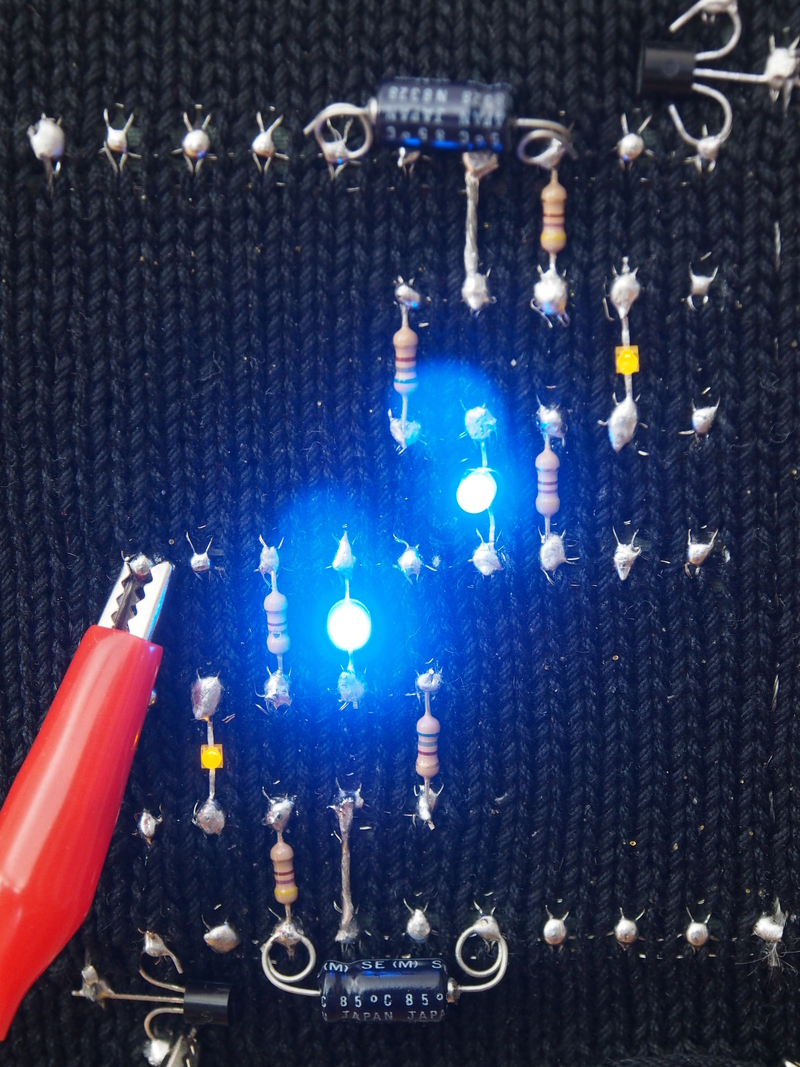 This one is an astable multivibrator, kinda like the wee blinkie and includes two transistors and two capacitors. (Haven't put in the power lines, hence the test leads.) 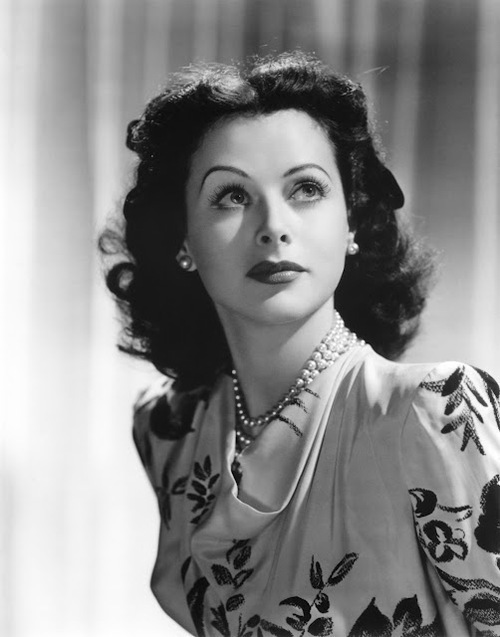 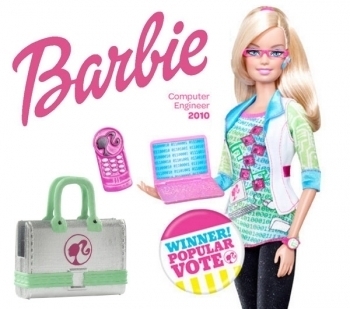