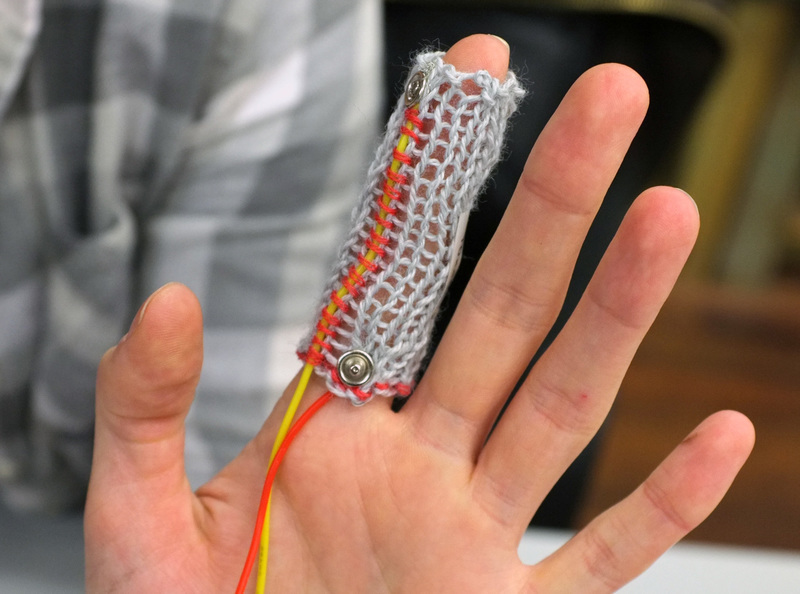 I made these knitted sleeves from a conductive yarn that changes resistance as the knit is stretched. 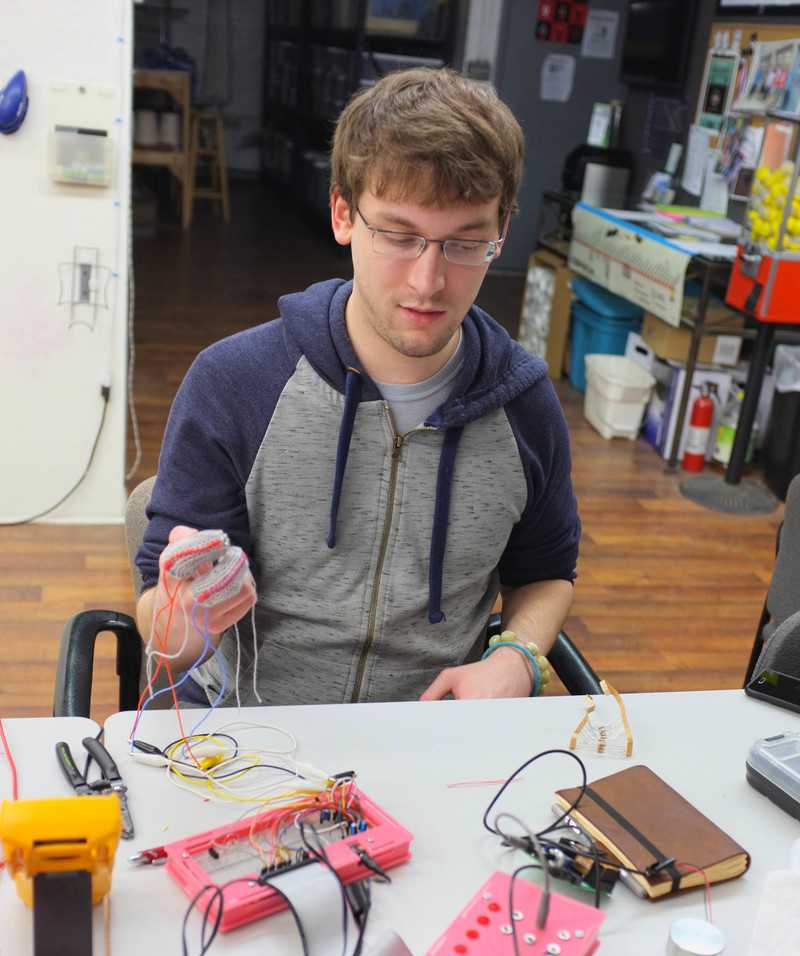 Jenna Boyles, Kyle Werle, and Christine Shallenberg beta-tested the sensors at Pumping Station: One. They selected sleeves for fit, then stitched on the wires themselves. Kyle and Christine were able to use the sensors to control an analog synth and a processing sketch.

With this project, I wanted to design a glove that could be machine-knit for workshops cheaply and quickly, making a wearable bend sensor available to people with no textile skills.

I decided to go with a modular approach (individual sleeves instead of single glove) because:

With a range of sleeve sizes, users can select the sleeve with the best fit and resistance range for each digit. We attach flexible silicone wires by means of a snap press, and the wearer then sews the wire in place with a tapestry needle and yarn -- very easy!  Transferring the sewing to the end-user means I can produce a batch of these more quickly for a workshop. Once the sleeve is finished, the user can use the tapestry needle to easily sew the wire leads in place along a fingerless glove. 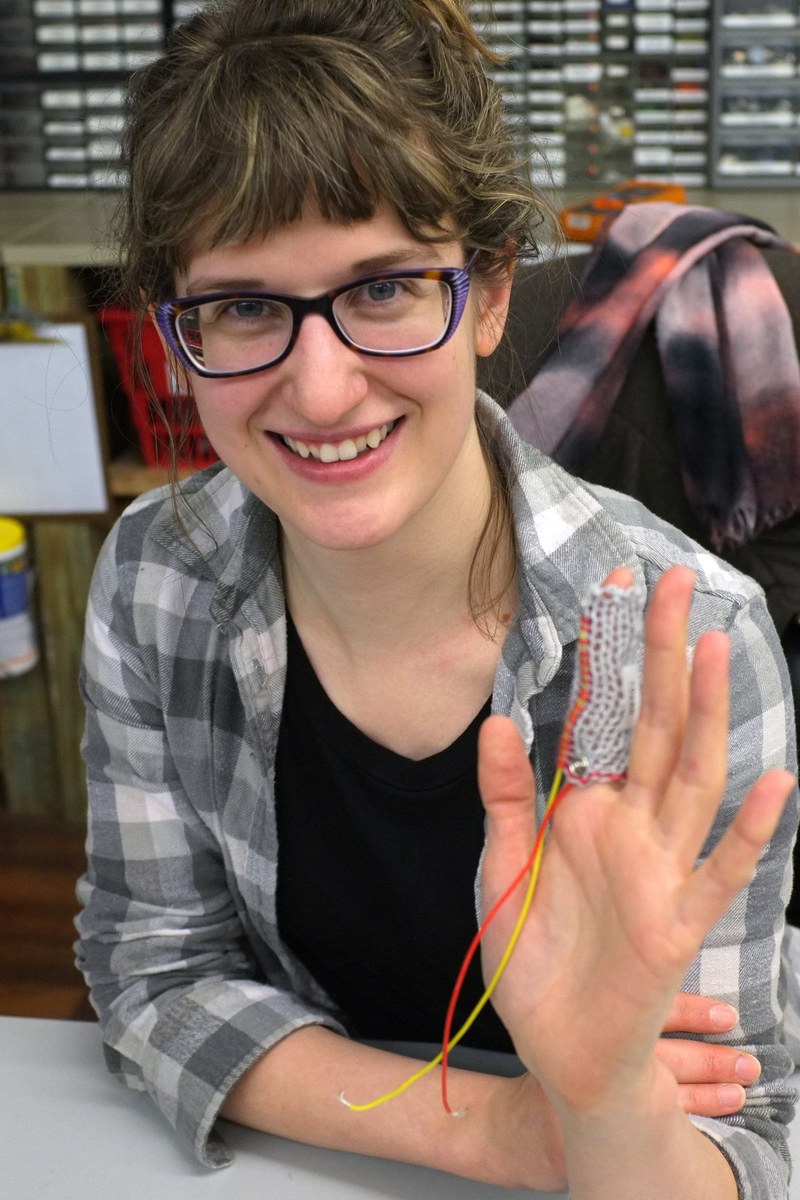 Resistance varies by user. Everyone could reduce the resistance to less than 100 Ohms by curling up their finger. We were generally able to get a maximum resistance of at least 5k with a tight fit, to 20k or 30k for a more comfortable fit. The shorter the sleeve, the lower the highest possible resistance. Longer sleeves had much more range.

The sleeves are knit on a Super S48 double bed machine. Both beds are at tension 10, with a bed gap of 4. The sleeves are circular knit, with cast on/cast off using waste yarn, then finished by hand stitching. The sleeves should cover most of the finger, but are not intended to cover the fingertips.

Sizing has been a challenge with this project and it took some experimenting to get a useful range of sizes. For workshops, I need to be able to knit sleeves of the appropriate size ahead of time, based on a single hand measurement submitted by a participant.

I tested the sleeves for fit and resistance on a dozen volunteers at Pumping Station: One. From that, I created a sizing chart, in order to offer a range of sizes, based on hand circumference. 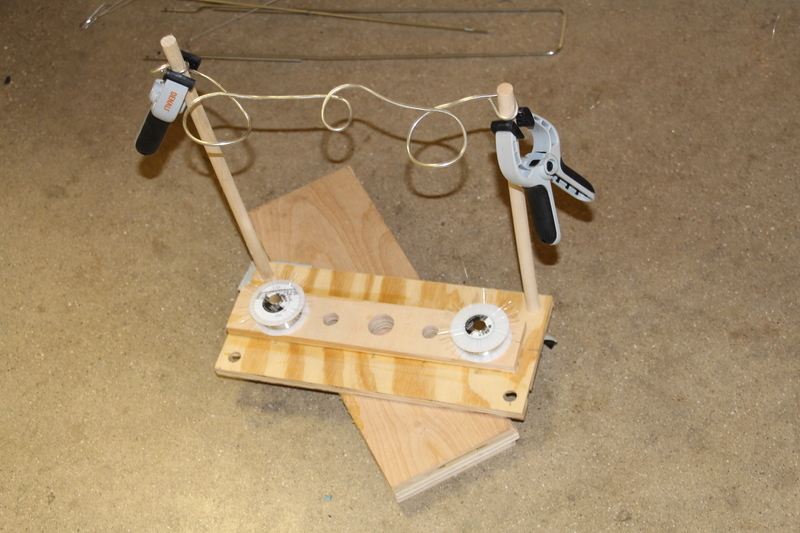 I've been working on a method to machine knit with copper wire, for creating eTextiles.

the solution (so far):


I based this design on industrial coil winding methods. For instance:


This research has been a part of my Public Engagement Maker Residency at UIC/Mana Contemporary, working with Professor Sabrina Raaf. Also, props to Ed Bennett, for pointing out the tension mast wire-bending issue.
I'm experimenting with machine knitting 2-color patterns with wire and cotton to create "pads" for direct soldering of components.
This simple circuit uses 5 leds, a switch and a battery, all soldered in place.
The wire looks great, and the circuit held up fine during a day of wear. 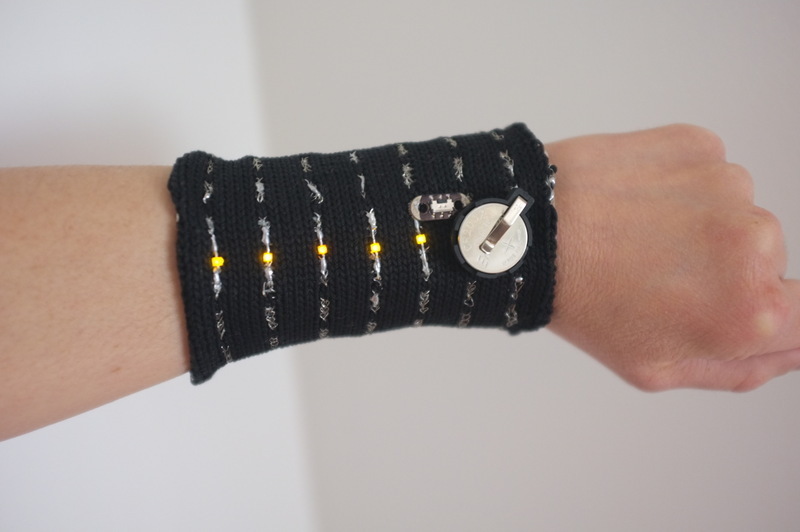 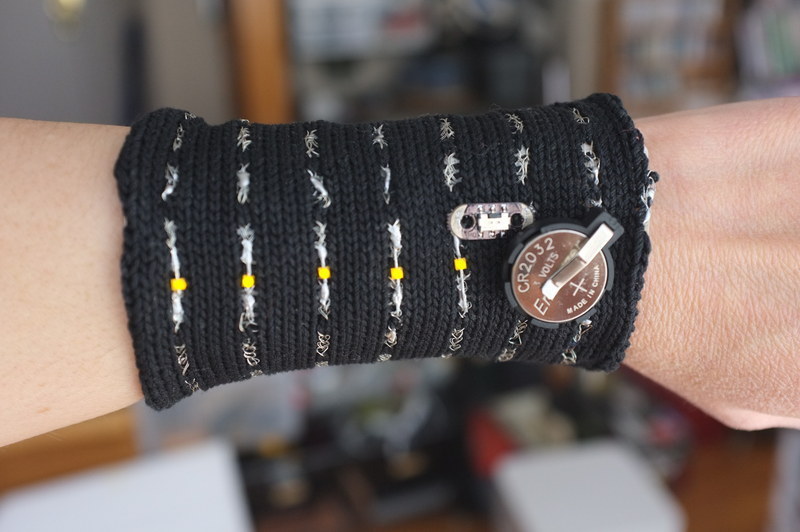 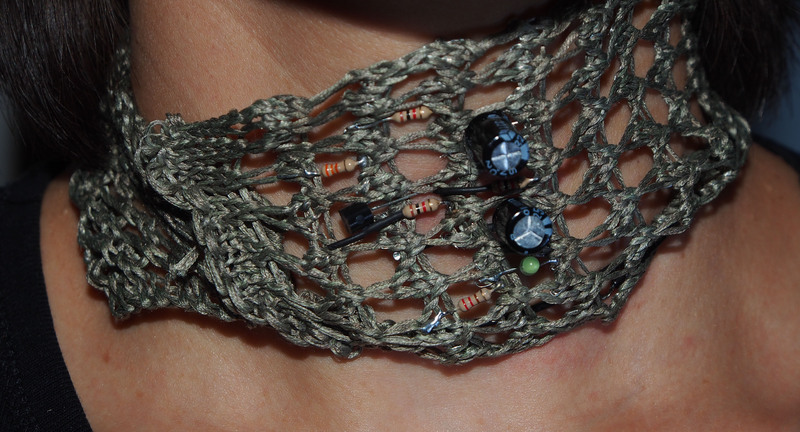 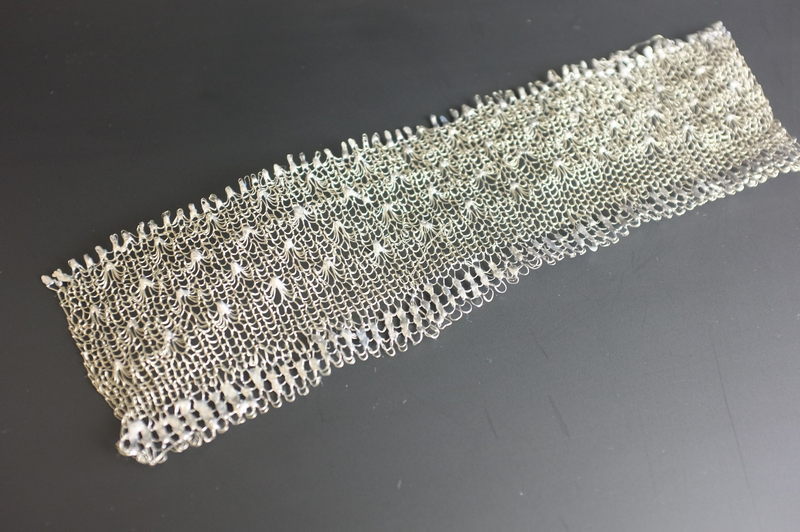 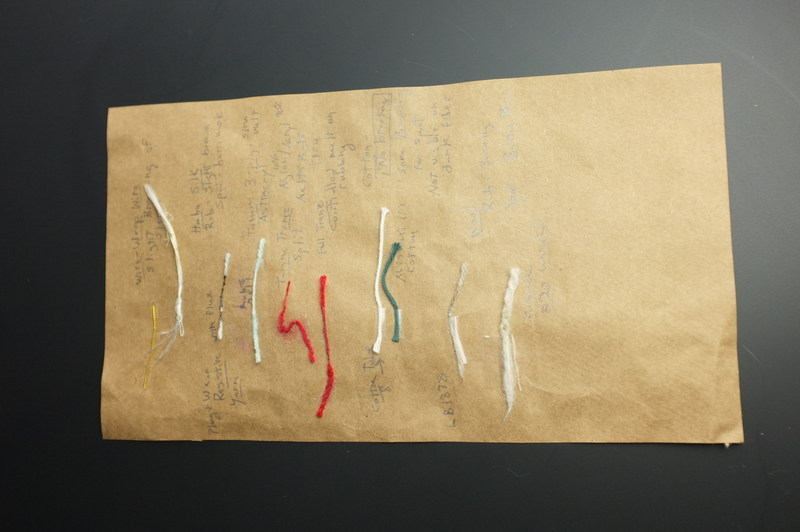 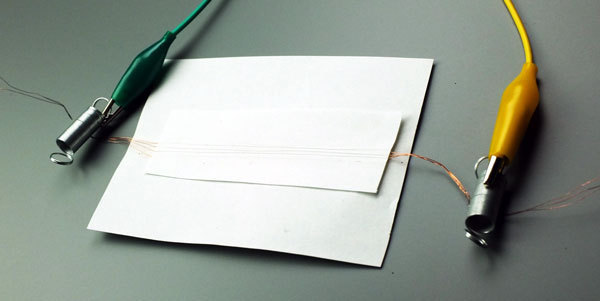 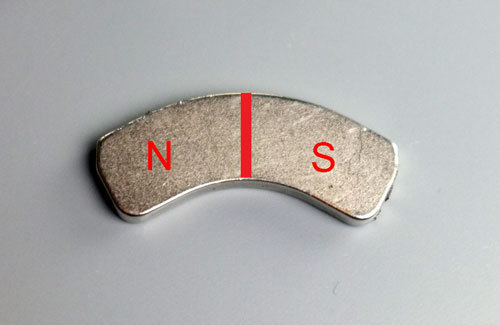 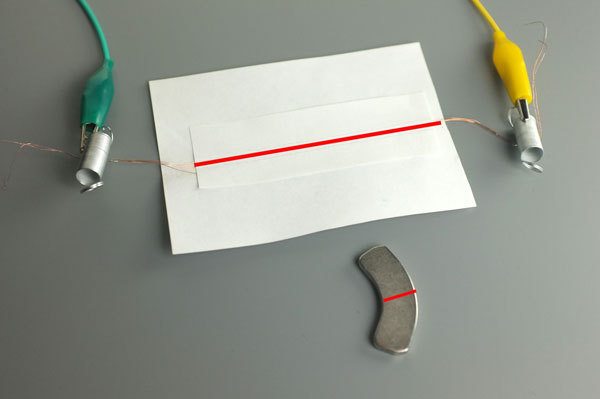 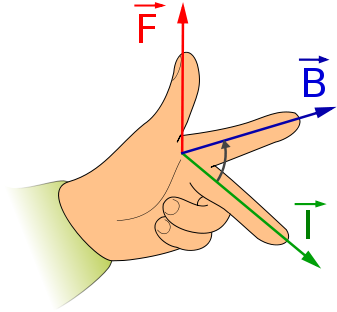 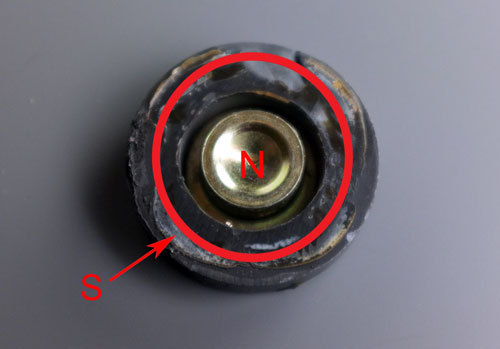 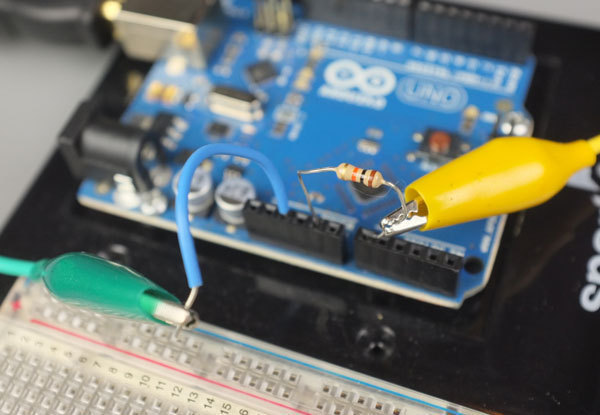 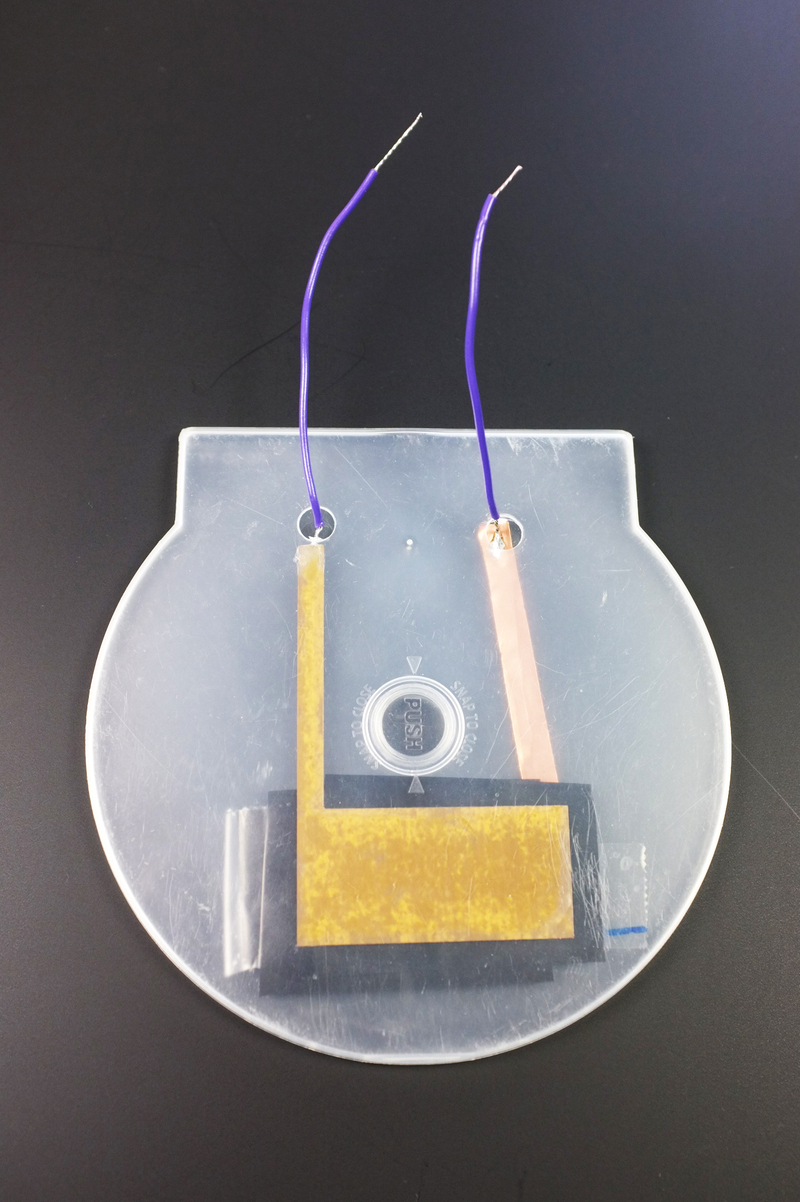 This is a DIY variable resistor I designed as an interface for live performance-- like a stompbox.

Resistance ranges from 0 to about 20k ohms. It's very sensitive to slight changes in pressure. If you want subtle manipulation, I'd recommend using your hands. But with an Arduino, you can use big jumps in resistance as an on/off switch-- perfect for foot-powered control! The important thing is that it can take a beating, as long as the solder points are protected.