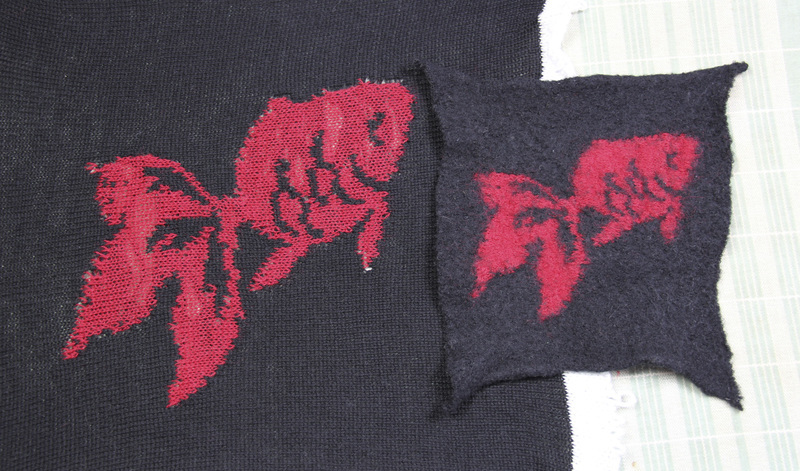 I first knitted with Yeoman Felting Wool last summer, when Yeoman donated a large box of yarn to the eTextiles Summer Camp. It's easier to hand-felt than other wool yarns I've tried, so I ordered a half dozen colors and started to play. It's fun to make detailed colorful designs, and perfect for holiday gifts. But there are a few pitfalls in creating your design. Read on for info about:
Holes

The designs pictured are "single motif": the pattern does not repeat and the contrast yarn stitches are wider than 5 stitches in a row. This results in long "floats" of yarn on the back side. Normally you'd "wrap" the edge needles while you knit to avoid big gaps caused by the edge stitches "laddering." Instructions for this are often included in machine manuals under "how to knit single motif". 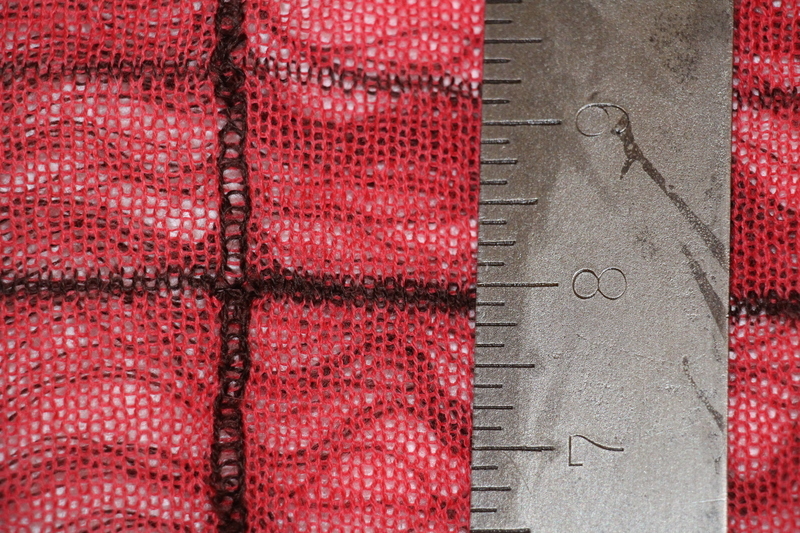 The edge needles are not wrapped in this piece. This resulted in laddering: large gaps and sagging stitches at the edge of each color. This is particularly visible around the brown in the middle. 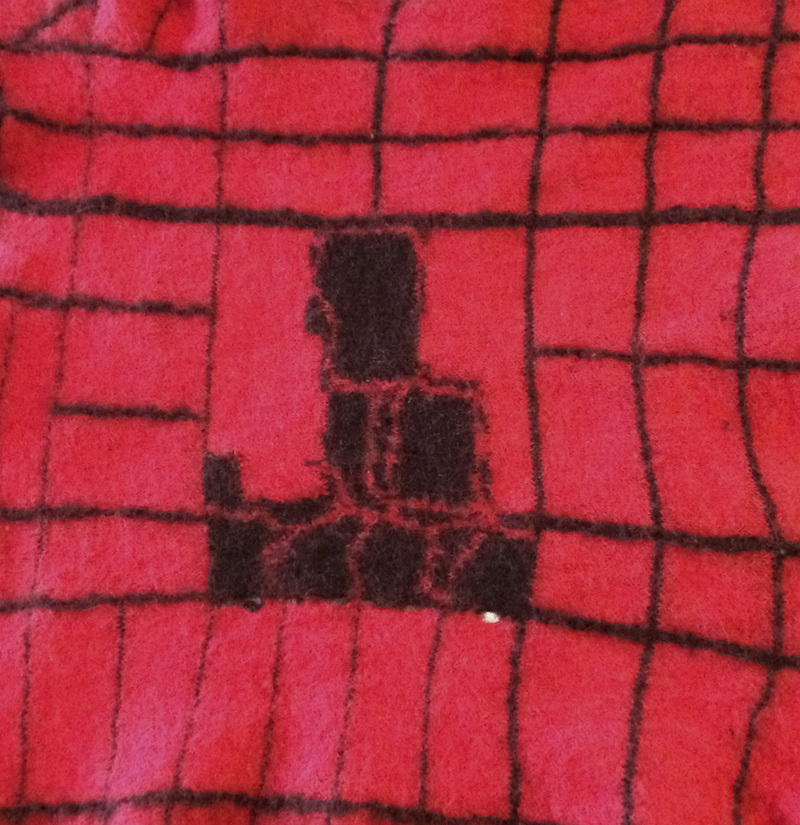 Most gaps disappear completely in the felting process, except those along a vertical line that runs along a column of stitches. This is visible in the finished map. I think a quick basting and/or a little more felting would fix it. In the future, I plan to try wrapping edge needles wherever there are long vertical lines.

(The image above is a neighborhood map for a friend's young daughter who really, really likes pink. My friend likes to craft so I'm leaving it to her to add the landmarks meaningful to her family.)

Different parts of a single pattern may felt at different rates, resulting in an uneven surface and lopsidedness. This could be due in part to color. Bright, vibrant colors may require the yarn to be chemically treated in a way that affects how quickly it felts. (I noticed the brown felted faster than the pink, for instance.)

However, the pattern itself plays an important role.

If there are floats behind the knitting, the stitches will felt faster because they are felting to the fibers underneath. You can see this on the wrong side of this cuff. 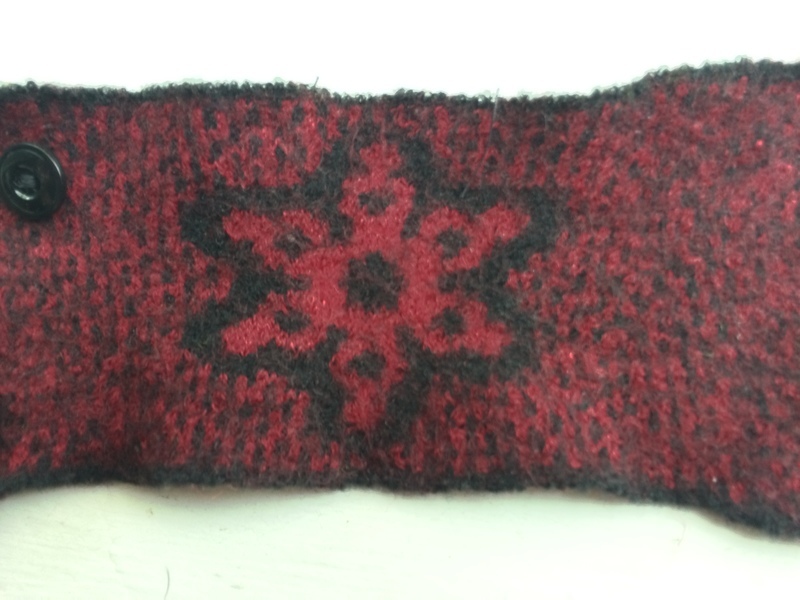 The pattern of the fish, at the top of this post, has long, black floats behind the red fish. The floats felted in place but as the felting advanced, the black started to bleed through, becoming visible on the body of the red fish.

Also small details of the design (like the fish scales) become blurry as colors blended together across the surface.

I fixed this on another piece with a razor. Once the piece was dry, I lightly shaved off some of the blurry layer to reveal the details. Be very careful with this-- it's easy to nick a hole in the piece.

This is a map of the lakes around my parents' home in central Florida.

I wanted to avoid the beige floats bleeding through into the Atlantic ocean on the right side. So I did a light felting by hand to keep everything in place, then cut off the long floats behind the ocean portion. Then I put it in the washer on hot for 6 minutes. The result: a bright blue ocean but... the ocean did not felt as tightly as the rest of the design.

The solid blue felted less than the speckles of lakes. The floats created by the contrast yarn causes more felting, especially in the areas with lots of really small lakes. (This piece gave me a new appreciation for just how much water is in Florida.)

The edges always felt less, because those stitches have less wool to grab onto as they felt. To compensate, I added a 2-color border at each end, in a tiny, repeating pattern, full of short floats. It felted nicely, except for those darn corners! I may try trimming them off in the future. I'd also like to try basting the ends together, felting, and then cutting them apart.

For basic instructions, check out TECHknitting. I also used the book Uniquely Felt by Christine White. She focuses on felting roving --unspun wool--  but I still found it useful and detailed.

I used the method of putting the knit in a tub of very hot water, adding dish soap, and rubbing the wool between my hands.

***Best results came from stretching the knit vertically by tugging on the top and bottom, then rubbed horizontally across the lengthened stitches.***

It also helped to sandwich the knit between layers of a plastic bath mat.

I usually felt once, let it dry, remove waste yarn, then felted at least once more.

You can also felt knits by tossing them in the washing machine on hot, with detergent, and checking the progress every few minutes. I've heard that this is convenient, but gives you little control. I tried this with the third felting of the lake map and it worked well. However, the washer broke the next day and had to be completely replaced. We're pretty certain the two events were completely unrelated but still...

All the pieces were made on a Brother 930, T2, with img2track software to upload the images. I used waste yarn and ravel cord for casting on and off. Both were removed after the first felting.

I knitted these pieces single stranded, which creates a very loose knit, even on T2.
Yeoman felting wool is available in 15 colors. I wish there were more colors, but the price is reasonable, £11.50 for 350 grams.
It can be ordered directly from Yeoman, or in the US, through Knit It Now.

Knitting double stranded also works, and felts much more easily, but shrinks less. I'm experimenting with double stranded for felted e-textiles, and will post about that later.