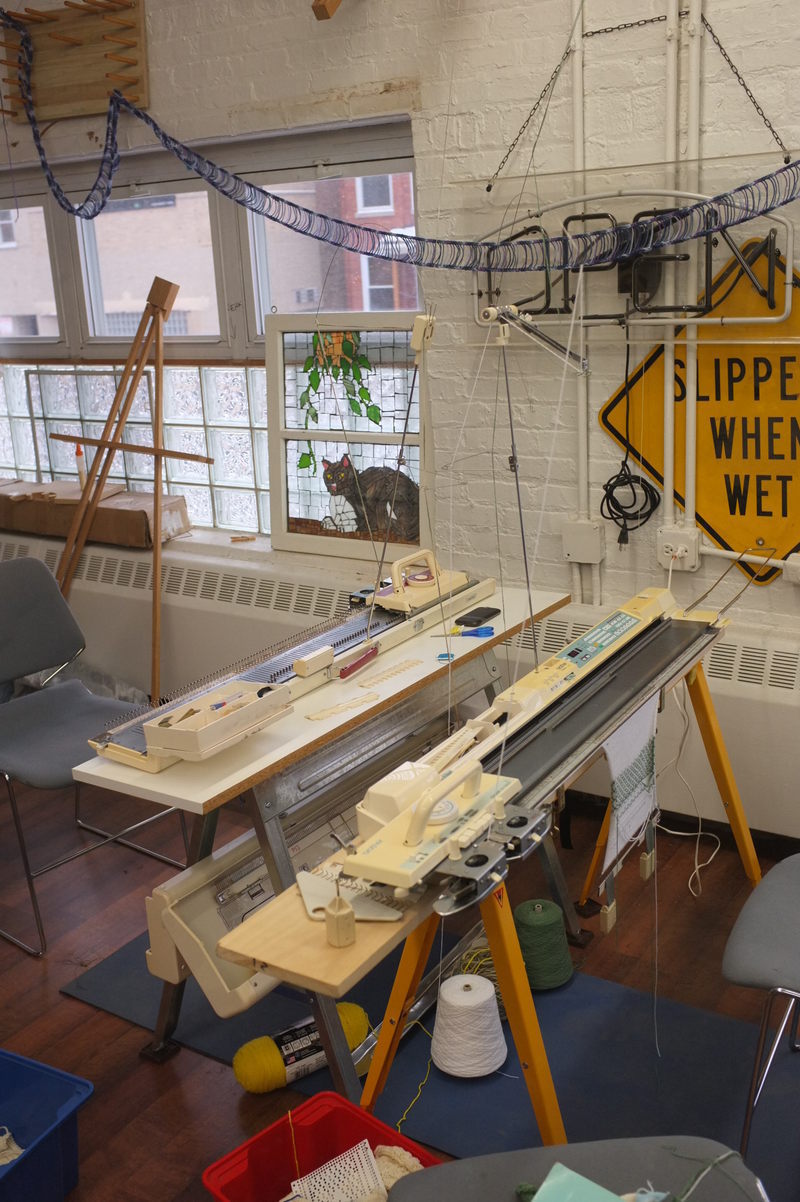 My work has been accepted to the Craft/Work show, to open at Beauty & Brawn Gallery in April, 2014.  They're interested in my knitted speakers, a project I hope to document here soon. I'm looking forward to working with the Craft/Work artists, and connecting with a community that embraces textiles.  I work in a department of audio engineers and I make a lot of work at the hackerspace Pumping Station: One. They're both great places with strong "engineering" cultures.  They're also both over 80% male. So when I started experimenting with knitting machines in 2012, seeking ways to knit e-textiles, I thought it'd be a great way to connect to a historically female community. However, when I started giving knitting machine workshops at PS:1, I was a little surprised that most of the people who signed up were guys. (In hindsight, it makes sense, given the membership demographics.)
I don't hand-knit, but I did learn to crochet around the same time I started working with the machine. I've come to appreciate the differences, and why a knitting machine won't appeal to many knitters. Like any machine, it's noisy. It requires all of your attention. Frequent interruptions can be problematic. Unlike knitting needles or a crochet hook, you can't curl up with it on the couch, or take it to a friend's house. So it's a rather solitary occupation. (As Dan pointed out, people don't socialize while using sewing machines, either.)There are knitting machine clubs that hold workshops (though none in the city). They meet in large community centers where members can set up their hefty machines for the afternoon. However, given the bulk of the machine, this can only work in communities that don't rely on public transit. (I rode my knitting machines to the space on my cargo bike for the first workshop. It'll be awhile before I do that again.)

At PS:1, we currently have two machines: one owned by the space, and one of mine on loan. I've realized that 2 people per machine is ideal: any more and people inevitably can't see or participate in what's going on. So I've had to cap the numbers at 4. I've really enjoyed sharing the technology with the other participants. I've come to realize that my fascination with how the machine works far outweighs any desire to make wearables. Perhaps this engineering mindset means I'll be knitting a lot more electronics before I ever make a sweater.


My First Instructable
I've finally entered the world of Instructables, and have published the entirety of my clamshell stompbox documentation there. For sheer simplicity, I rather like Plusea's Stickytape Sensor, but it's nice to find a use for old CD clamshells.