I recently found a Brother KA-8310 linker for $35 on eBay ("working condition"!). I hear these things break more than work, but for the price, I figured, why not? The linker arrived, in clean condition, with original packaging and manual. I knitted up a test swatch, followed the instructions and.... sure enough, it didn't work. Parts moved when I turned the crank, but it did not advance on the bed of my Brother 940.

Then I realized my mistake. I hadn't let Dan tinker with it first.

So, I brought it home, set the box in front of him, and said, "Wanna fix this?" He picked up a screwdriver and I grabbed my camera. (Thus began another romantic evening at home...) 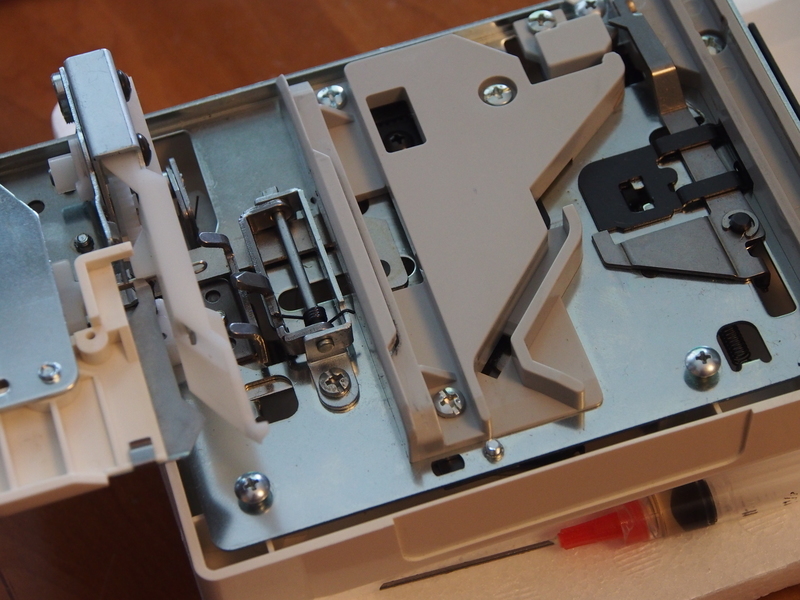 Underside of linker. Remove 3 screws to get the top off. Picture #2 shows the 3 screws removed (top right, bottom left and right). 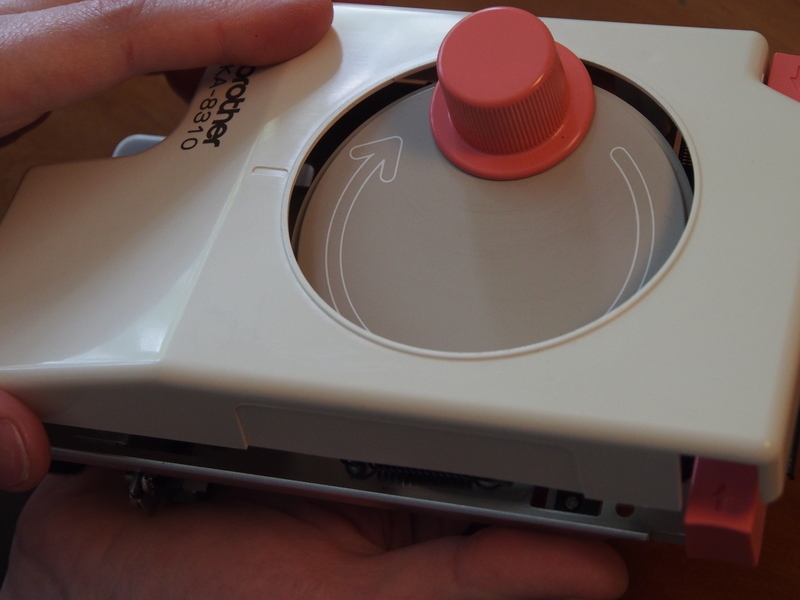 The white plastic case can be removed when the handle is turned to the side like this.

Frequently the oil in these old machines just freezes up. The secret to unsticking them (according to Dan) is a little oil and a lot of patience.

When restoring an old piece of gear, start by identifying all the parts that look like they should move. For knitting machine carriages (and linkers), these parts are often mounted on pins

Dan uses a syringe to squirt Balistol into the base of the pin. He then works the metal part mounted on that pin, gently rocking it back and forth, which causes the new oil to flow down into the mechanism. Sometimes old dirty oil works its way to the surface, and is wiped away. Eventually, the pin loosens up completely and it starts to work like new.

If you don't have a syringe handy, dip a sewing needle into the oil and apply drops of it with the needle. 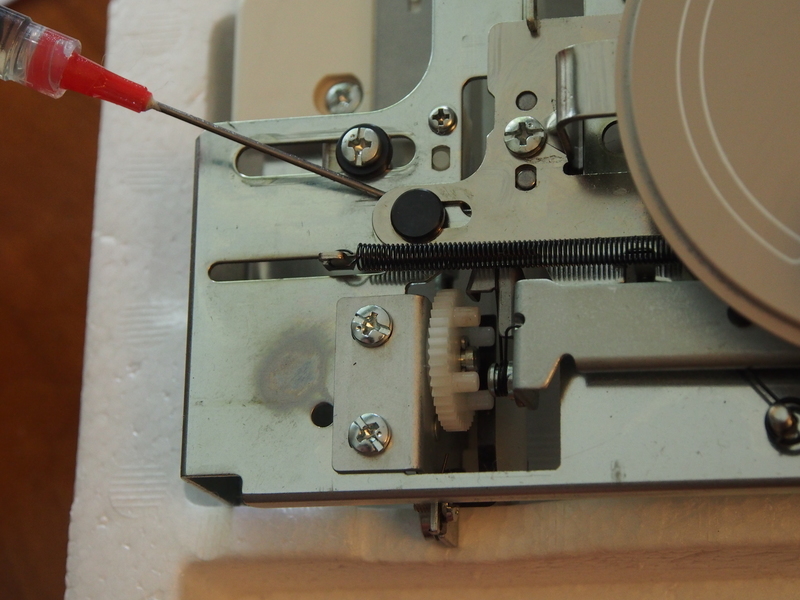 Applying oil to a pin 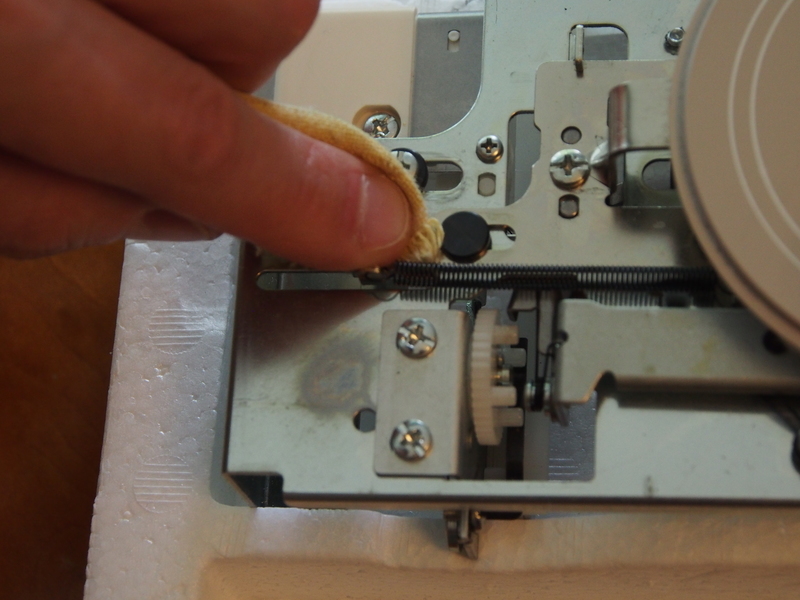 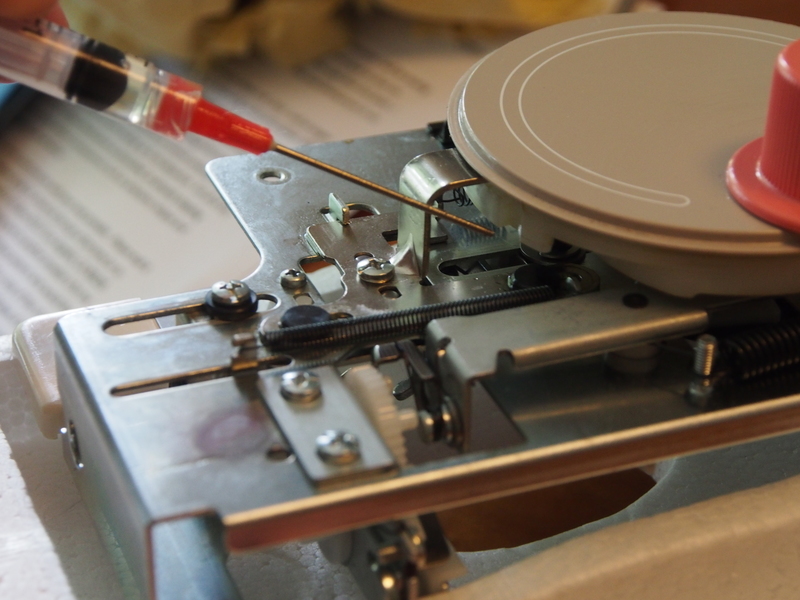 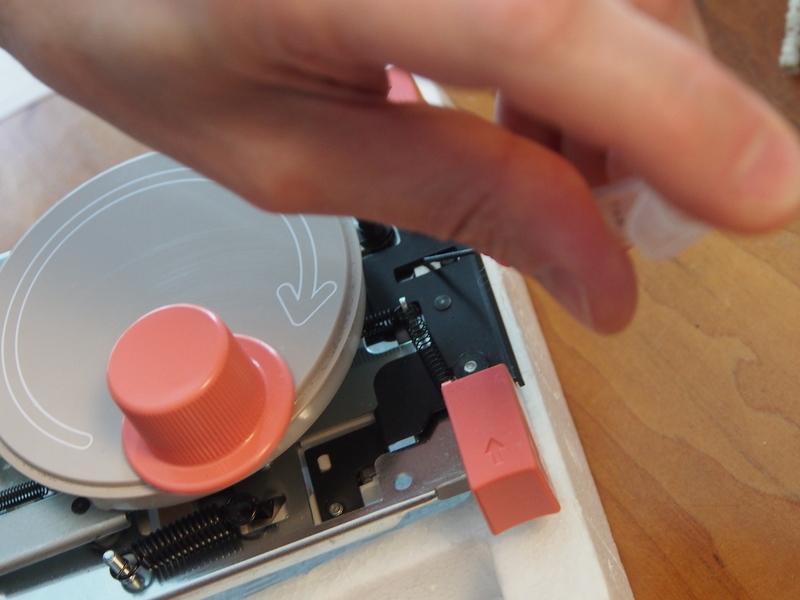 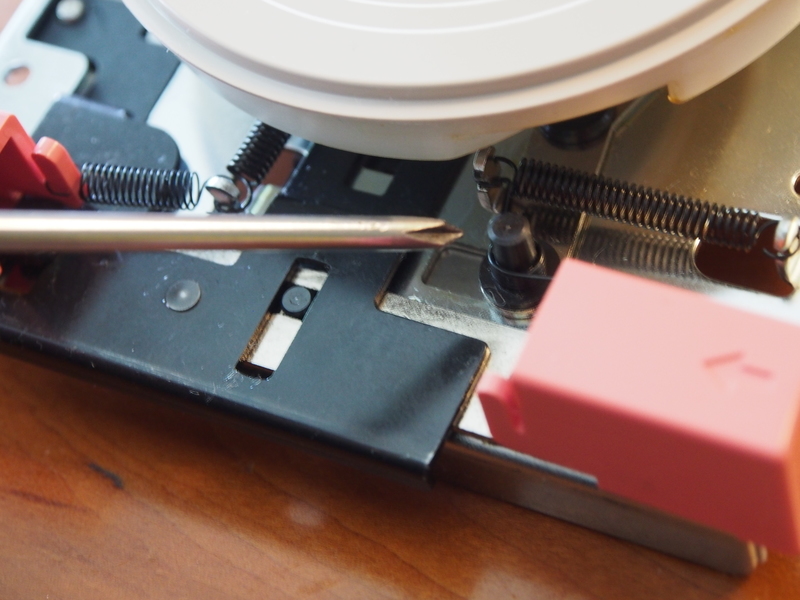 After oiling all the parts that seemed a bit slow, Dan found this part that was completely frozen.

This apparently is the part that advanced the linker on the needle bed. 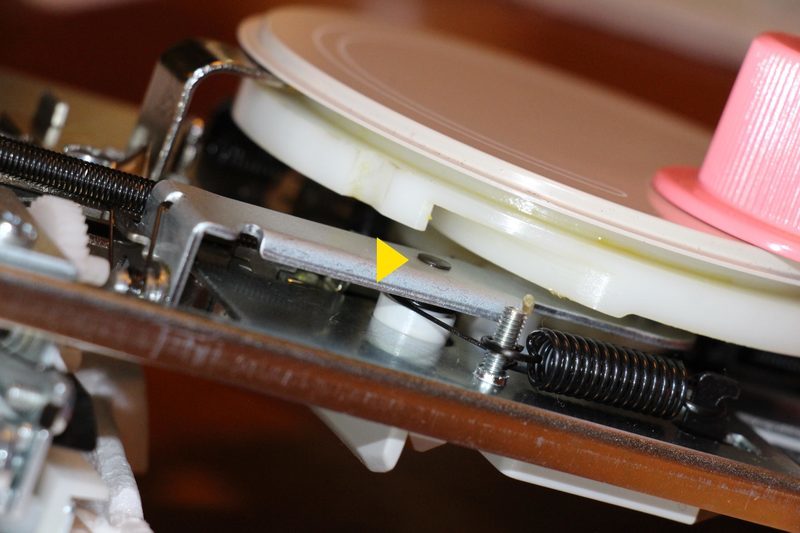 It looked like it had gotten stuck, and then someone kept using it in its stuck state, which caused the flat metal arm to get wobbly and bent. It needed a very thin washer to stabilize it-- so we cut one from a post-it book flag, disassembled the arm, and inserted it. Perfect.

The yellow arrow indicates the post where we added the washer.

Here's video of the mechanism that advances the linker, in its working state. Note how the metal tab only pushes the white plastic prongs going to the left. Going to the right, it "hops" over them.

Follow up: Once the linker was working again, some parts were still a little slow. So Dan decided to revisit them with WD40. After spraying, he wiped away the excess, then added fresh Balistol oil.